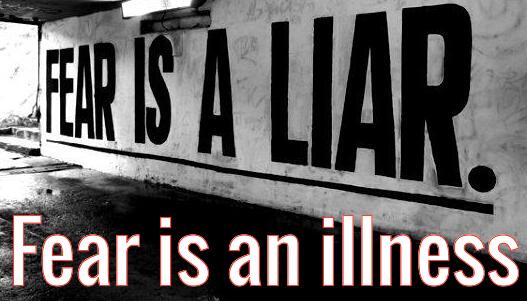 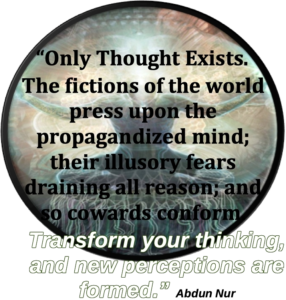 The Ba’alists control the masses through the generation of baseless fears, using dialectical synthesis.

Centered on one main, overarching dialectic (fictional narrative), created to establish mass acceptance and so impose change or a corollary (natural consequence) result, through the integration of opposites, forming a predetermined synthesis.

The thesis, antithesis and synthesis. This structure was first scholastically recognise by the German philosopher, Georg Wilhelm Friedrich Hegel (1770 – 1831)

The thesis of the pandemic myth and virus fantasies generate nosophobia, an uncontrollable and persistent fear of having a serious medical condition, and Thanatophobia the fear of death made to dominate the thoughts of your daily life, by the ‘main slime media’ who express biased, misleading narratives, in order to promote a political (corporate policy) agenda. 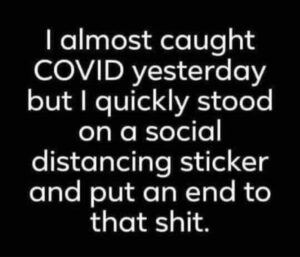 The elite are working hard to instill anthropophobia, a feeling of intense fear or anxiety at the thought of being around other people, into the masses, encouraging mask wearing, social distancing and the criminalising of some social interactions. Freedom of expression is under attack, as any voice of reason is a great danger to such a flimsy narrative.

Vaccines are the antithesis to appease the baseless fear of viruses, viruses are the fantasy invented to sell vaccines, vaccines increase cell death and repress or even destroy the bodies immune system, so help to foster disease, and disease generates revenue for the pharmaceutical corporations, who manufacture and sell more toxic poisons claimed to mask the symptoms of disease, these new poisons cause more cell death, which over time generates more disease, which the Pharmaceutical mafia can profit from, until the victim is driven into an early grave.

Disease generation and mass deaths are the “thesis” to allow the “antithesis” of totalitarian political regulation to dominate the masses, the “synthesis” allows the avaricious elite to impose a global totalitarian system of catholic (all-embracing) Ba’alist (owner) domination; a new world order. 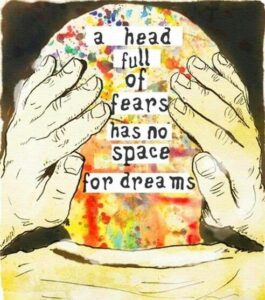 The antithesis must always be a monopoly as you cannot have those outside the fictional thesis narrative provide a solution which may expose the thesis fraud, or nullify it.

The synthesis must always be unreasonable, forcing change or actions that would otherwise be impossible or prevented, otherwise the original thesis would not need a controlled narrative, which is controlled only because a predetermined synthesis is desired, and the antithesis need not be a monopoly if the original premise were naturally occurring, as it would be simply, the unfolding of events, in a natural unfolding of events diverse alternatives and solution would be sort out not repressed, varied opinion encouraged and truth supported, not censored, criminalised and attacked.

There are many examples of this method of mass manipulation.

For example, at the end of the second world war the masses had witnessed the horrors, waste, pointlessness and heavy cost of war, and they would no longer support it, this was a huge problem for the parasitical psychopathic elite, their intellectual class of soulless psychopaths created a think group, to form a solution to this issue.

This think group was made up of only psychopathic Ashkenazi, they developed the thesis of nuclear weapons, a fictional weapon that could in one go destroy entire cities. The baseless fear is constructed, the masses are indoctrinated with Nucleomituphobia.

The antithesis is the justification for the military industrial complex being funded, and that funding being expanded exponentially across the earth.

Nuclear weapons are claimed to require a purified radio active material, this is further claimed deadly to your health if you come into contact with it, and the material is very difficult and exorbitantly expensive to manufacture. Legislation is imposed to outlaw the production and sale of purified radio active material, this establishes the monopoly to prevent the fraud from being exposed. 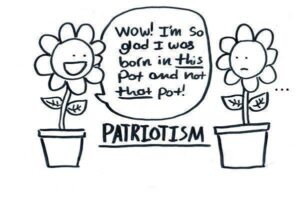 If only one fiefdom could create the weapon, this would not work of course. If they were the only nation with the weapon they could use it without fear of reprisals, and their fiefdom would not suffer Nucleomituphobia, the population may also demand the fictional weapon be outlawed. So they spread the fraud across many fiefdoms, to allow them to collectively agree never to use the fictional weapons.

Link: The Claim of Nuclear Weapons

The synthesis is, unprovoked war can continue as the Ba’alists dictate, used to destabilise areas, to replace non-cooperative dictators, to repress prosperity and security of populations, to encourage xenophobia and its politically correct parallel, patriotism.

Another example of the baseless thesis is climate change, designed to generate Eco-anxiety: A chronic fear of environmental doom.

In the 1960’s and 70’s the paedophile class of soulless psychopaths suffered corporate disruption and a strong negative public perception, created by the toxic dumping in oceans, rivers, land and air across the earth by the four conglomerate corporations that represent around 96% of all corporations in existence. 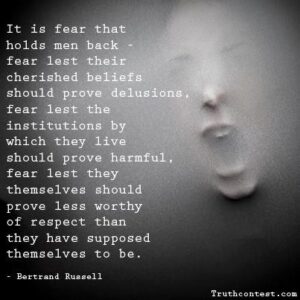 The thesis was created of CO2, plant food, not pollution, as the real danger to the planet, and CO2 was made the enemy. The organisations fighting the corporate Ba’alist polluters were subverted, and the Ba’alist’s own representatives were installed at their head to redirect their efforts away from pollution and towards CO2.

The antithesis is to impose heavy taxation upon the masses, enriching the elite, establishing new monopolies, carbon credits, and through imposed regulation, claimed to protect the environment, shutting out all competition to the four corporations. Now nothing can disrupt the constant corporate dumping, the corporations can dump real pollution without any fear of negative reactions, while the global population are punished for generating plant food, CO2, which would, if increased as a proportion of the atmosphere, increase plant life.

If you reduce CO2 you reduce plant life globally, if CO2 is reduced enough, you would reduce food production and ultimately cause global starvation, if you remove the 0.35% (around a third of 1%) of CO2 that presently exists in the atmosphere, then very quickly there would be no life on Earth.

The synthesis of the climate change narrative is to prevent any competition to the existing conglomerate monopolies having any opportunity or ability to form, through increasing expense, regulation and licenses to a point only the conglomerates could afford them. Forming repressive monopolies on food production, seeds access, water supplies and fuels, under the baseless thesis narrative “to protect the planet”. 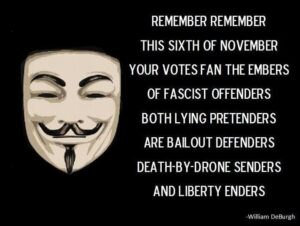 When capital dictates production, those who monopolise resources will produce for maximum profit (the interest demanded for the use of capital), ideally within monopolies, which then allows complete disregard for pollution, product quality, product longevity, or superlative product design, the only constraint is the fear of litigation, this risk is further reduced through corporate government legislation within fiefdoms, granting privilege (permission to rob the masses) monopolies, and limiting liability as an aspect of the subsidiary corporate model the corporate state fiction constructs.

The same thesis, or baseless narrative creation is used in the commercial corporate world, this can for example manufacture narratives that create new diseases, or viruses. For example, rabies, which is simply severe dehydration, causes the animal to act aggressively as the fluids surrounding the brain are leached away, the baseless narrative is created of a virus, then the antithesis of a vaccine and the synthesis of around 50,000 murders a year with a medical “treatment” that is 100% fatal, and huge profits in animal quarantine, vaccination and license. 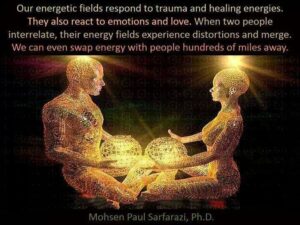 Fear is among the most powerful of all emotions, and the basis for the enslavement of humanity. Baseless fear presently allows a small elite to monopolise, extort, repress, subjugate and enslave humanity.

Fear weakens our immune system, stress hormones like cortisol and adrenaline are released, and if this state is suffered for a prolonged period it can cause cardiovascular damage, gastrointestinal problems such as ulcers and irritable bowel syndrome, and decreased fertility. It can lead to accelerated ageing and even premature death.

Being fearful is unhealthy, it makes you more cautious than you really need to be to stay safe, and can prevent you from doing things you would otherwise enjoy. Fear fills the slave mind, conformity to the antithesis of the thesis narrative allows the elite to achieve the synthesis they desire, and unless we can face “truth”, we will always hide in fear.

If you suffer a baseless fear generated by the Ba’alist psychopaths, truth will remove it, study the trivium and the quadrivium, once mastered any question can be examined and the truth free of bias, opinion and deceptions will be revealed, all fear will then dissolve away.

Link: Mastering the Skill of Reasoning – The Trivium

The schooling system was developed as a response to the trivium and quadrivium which entered Europe as the Crusaders returned, the trivium being, at that time, a companion book of the Qur’an. This generated the Renaissance, a fervent period between the 14th century to the 17th century, of European cultural, artistic, political and economic “rebirth”. The Vatican had attempted to stamp out the fire of reason that fueled the Renaissance with the inquisition, but this was failing as the masses began to reject their Monarchic slavery. 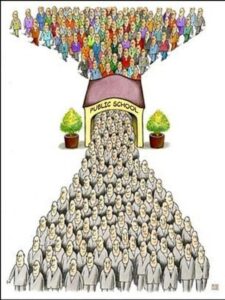 The Vatican rebranded the Ba’alist monarchic slavery as “democracy”, and instead of the masses suffering the hereditary dictates of a monarchy, they now suffered the dictates of an (rigged) elected representative/s, this scam couldn’t be achieved as long as people were learning to reason, only the dullest wit would accept democracy as anything other than the emperors new suit, so a better method was devised to stamp out reasoning once and for all, this gave birth to schooled minds.

The objective of the schooling system is to establish Epistemophobia; The fear of knowledge. At the beginning there was strong resistance to the schooling mandates by those who could reason, and the police and army were used to force children into the schools, but once the first generation was conditioned the process was easy, and the model was then marketed and exported globally.

“Most people would sooner die than think; in fact, they do so.” Bertrand Russell 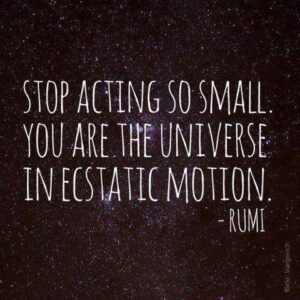 All souls are innately social, we’re one soul expressed infinitely, to remove that common unity and impose division into ranks, generates, within the soul, monophobia; the fear of being isolated. People capitulate to all demanded extorted taxation, fees, and fines because they stand alone, fearful of the reprisals, easy prey for the parasitical government corporations (mafia) henchman. The solution is common unity, if you stand united you’re no longer easy prey, no longer simple to pick off, they cannot make an example of you because those around you stand with you in defence.

Added to the monophobia, fear of isolation, is xenophobia, the fear of the unknown, people fear the legal system which was invented as slave law to control and mulct revenues from the masses, this is made complex and contrived with ritual, pomp and arrogant condescension in order to fill the victim with foreboding, so generating Liticaphobia the fear of being sued.

To cure xenophobia make the unknown known, to cure Liticaphobia, form local groups and practice various scenarios within a mock court room, practice interactions with policy enforcers, government bureaucrats, and creating basic templates to respond to correspondence from government parasites, building up a knowledge base and networking nationally.

Monophobia is cured with common unity, forming the bonds of surety, developing the power of reason and virtue within your own mind, and building all community upon the foundation of the inherent duty of care free of all forms of division (hierarchy). 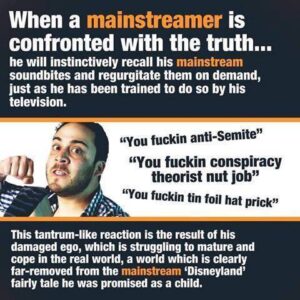 Every fear can be removed if approached correctly, just like any illness. All fears are founded on bias, so to heal any fear, remove the bias. Bias is a disproportionate weight in favor of or against an idea or thing, the schooling system is designed to instill bias through logical fallacies, accepting authority as truth blindly and emotional rather than reasoned determinations. This bias mentality generate the concept of cognitive dissonance, a mental disharmony creating psychological discomfort, anger, or the expression of ridicule when confronted with evidence or reason that refutes a held belief, value or attitude.