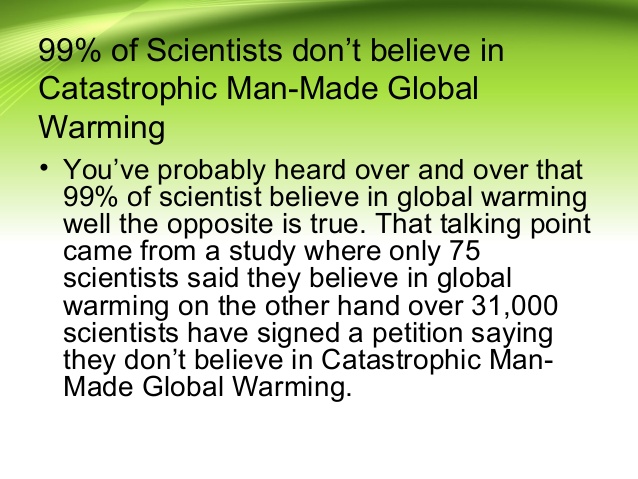 People are controlled through fear, in the past the owners had trouble with the slaves, who sort to prevent the constant dumping and spreading of toxic waste across the earth, this was resolved for the owners through the fiction of global warming, changed to climate change when no warming was shown, now the owners use the fraud of CO2 (plant food, if you reduce CO2 you will reduce the amount of plant life on the planet, if you lower enough you would create global starvation) as the bogeyman to tax and extort from the masses, while simultaneously diverting attention away completely from toxic pollution. Here is an explanation of why that con is easily disproved.

Is the “Global Climate” really in Danger?

“The influence of so-called greenhouse gases on near-surface temperature – is not yet absolutely proven. In other words, there is as yet no incontrovertible proof either of the greenhouse effect, or its connection with alleged global warming.

This is no surprise, because in fact there is no such thing as the greenhouse effect: it is an impossibility.  The statement that so-called greenhouse gases, especially CO2, contribute to near-surface atmospheric warming is in glaring contradiction to well-known physical laws relating to gas and vapour, as well as to general caloric theory.’ Heinz Thieme

If one believes politicians and the media, the world is in danger: the earth is heating up – catastrophe will result – and civilization is the cause! Even school children are freightened1) and taught that mankind can and must save the climate2). But this message is linked to a hidden agenda. Its purpose is to prepare the citizens for sacrifice: Rescue is possible – maybe -though unfortunately it is awfully expensive!3)

In fulfilment of the “Kyoto Protocol”, energy providers and industry in the participating countries are requested to pay for “emission credits”. These are to be kept in short supply – with the intended result of skyrocketing prices!4).

Since wind and sun are claimed to be “friendly to the environ-ment”, utilities are mandated by law to buy “renewable energy” from outside parties: at random times, in unforeseeable quantities and at excessive prices. Their costs are driven up – and so are energy prices for corporations and households (Fig. 32)5) 6).

Car owners are stigmatized, auto manufacturers castigated and home owners misled to inefficient choices by officially sponsored campaigns and a stream of new regulations and taxes7).

Rising costs and prices damage the competitive position of an economy and result in impoverishment, especially of the poor.

However, some are rewarded: “climate scientists”8), “energy advisers”, manufacturers and operators of wind generators9), and all enterprises to which governments present CO2 certificates for free, as long as they make others bear the cost.10)In spite of the rising burdens imposed on almost all businesses and citizens, few politicians have questioned the “fight against climate change”. Over years, hardly a newspaper challenged the scientific basis of the “greenhouse” dogma. If asked, its proponents referred to a “scientific consensus” regarding “human made climate change”. Accordingly, dissenting opinions had to be un-founded and were not worth consideration.

However, thorough review of the pertinent scientific literature and questioning of experts reveals that there is in fact no consensus at all regarding the so-called “greenhouse effect”:

Almost all scientific papers related to “greenhouse effect”, “climate change” and the supposed human influence do not critically examine these statements, and instead simply assume them to be true.11)

There are tens of thousands of publications in which the authors either find no relation to “climate change”12), or even explicitly reject the concepts on which “climatologists” have based their assumptions.13).

There are in fact several different “greenhouse gas theories” based upon very different physical assumptions14). The commonly believed notion that increased CO2 will catastrophically warm the planet does not hold up to scientific scrutiny and the laws of physics. Here is why: The initial point: the CO2 warming hypothesis The common belief is that there is a “natural greenhouse effect”. On top of that there would emerge an additional manmade effect:

The real earth’s average temperature is assumed to be 15°C 16).

The sun heats the earth by visible light.

“Greenhouse gases” catch the radiation and send a part of the energy as “back radiation” back to the earth’s surface (Fig. 21). Thus, the ground is additionally heated.

In a fictitious atmosphere without “greenhouse gases” all radiation would escape into space – this atmosphere would be colder. It is claimed that more CO2 – produced by mankind – leads to more back radiation and thus to more warming: to a “man-made effect” on top of the “natural 33°C” 19).

This is the foundation of the imaginary world we call the “Green Tower of Climate Dogma” (Fig. 2). The focus of this Report This study only deals with one basic fact: Does an increase of CO2concentration raise the earth’s temperatures – or not? This is simply a question of physics and not of political or environmental beliefs. If there was not such an influence, then all climate-model calculations would be wrong, the consequences predicted would consequently be false, and all costly “rescue plans” would be completely unnecessary.

It is this critical point upon which this report will focus. This approach differs from most other critiques of the greenhouse dog-ma and purposely sets aside peripheral issues that distract from the core issue noted above:

We do not look at historical temperature time series. Whether it was warmer or colder than today 2, 20, 200 or 2000 years ago, is not relevant to the physical effects of CO2.

The same is true for CO2 levels in the atmosphere. Are CO2levels actually higher today than in the past? Contrary to the popular belief, hundreds of old and new studies show that CO2levels have been higher than the present in the recent and distant past20). If, however, CO2 did not affect global temperature, the atmospheric levels would not be of importance21).

Does the sun control the temperatures on earth?

There is evidence that it does, but we will not examine this question any further. This paper is only about the fact that CO2 does not control global temperature.

Is “climate” predictable – with computers? Many experts disagree. However, in this study, it is not of interest, whether climate computer models can be improved if proper assumptions are made. It is sufficient for us to show that they must be wrong, if they are programmed based on incorrect assumptions.

Finally, we avoid the heated debates on claimed consequences of “climate change”. Will the polar bear become extinct in fifty years?

Our answer today: “We don’t know!” (22) Summary of our most important results:

The Earth has a natural “cooling system”. It continuously radiates energy into space.

Any increase in temperatures automatically boosts this radiation. The cooling power jumps up. “Global warming” (i.e. a general increase of temperatures) requires this incremental cooling to be compensated by an increase in heating power.

Accordingly, in order to achieve “global warming”, CO2 had to in-crease the flow of energy from outside the system to the Earth’s surface. But this is beyond even the claimed capabilities of this gas. Therefore CO2 cannot cause any warming.

Climate variability did and does exist. However, the CO2 level in the atmosphere is not the cause. Aside from the sun itself, changing cloud coverage is the main factor.

Analysis “Greenhouse warming” fails from “lack of energy” There are three ways to check a scientific hypothesis and disprove it if necessary:

2 check each step of the scientific derivation

3 check the results for compatibility with established physical laws.

We choose the third option and review the results: The claimed “greenhouse effect” would lead to a surge of the temperatures on the ground as well as in the air immediately above when the atmospheric CO2 concentration goes up (23). However, is this possible at all? Let us perform a thought experiment. We assume “global warming” has occurred for initially unknown reasons. Now the question is: under which conditions could the earth remain warm?

To answer the question, one must know that matter constantly radiates energy; in colder surroundings it attempts to cool down. If we want to keep a hot plate or a BBQ grill hotter than its environment, we must supply a steady flow of energy: by means of “electricity” or charcoal burning. If there is no more electricity, our stove cools down very soon. This also goes for the earth. Earth’s surface, clouds and atmosphere constantly radiate energy into space – and the resulting loss of energy causes cooling. However, in spite of variations in the lengths of days and weather, the earth remains “warm” be-cause the sun constantly supplies new energy. As a simplification we can draw the earth’s energy dynamics as a “stock flow model”: with an “influx” (heating: the sun), to an energy stock and a “drain” (cooling: radiation into the universe).

The temperatures depend on the energy stock – if it decreases, it gets cold. (24)The radiation of matter is determined by its temperature. If temperature goes up, radiation goes up as well (fig. 5). This is the reason why a hot plate simply does not melt and evaporate on stepping up the electrical power(25). If the power supply is boosted by e.g. 500 Watt, then the temperature rises, but only as far as the plate’s additional energy delivery to its environment (i.e. the self cooling) has also escalated by 500 Watt. Then balance is re-established, and the temperature ascent stops entirely. Let us assume the earth warmed up, for instance, to the claimed hazardous level of additional 2°C 26). As in the hot plate example, the earth’s cooling power would now rise(27), according to our very simple evaluation, by approximately 3% (28). Such an increase of cooling radiation as a result of warming is confirmed by satellite measurements(29). In the warm year of 2002 the average outbound radiation was approximately 7 W/m² above the minima of the colder period in 1984 to ‘93 (fig. 6).

To read more : Is the “Global Climate” really in Danger?