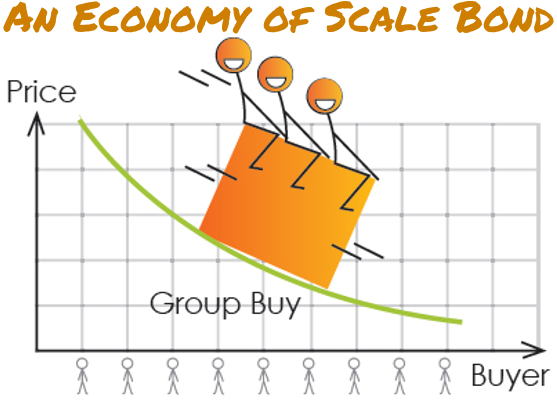 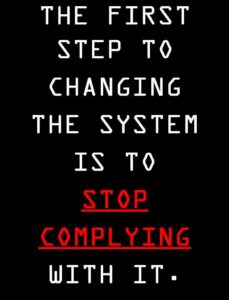 The bonding platform allows a collective purchasing bond to be formed. In the transition from corporations to cooperatives, economy of scale bonds can reduce costs considerably for bondsman.

This method removes middlemen costs, as the collective bond seeks to buy directly from the manufacturer, negotiating for a large volume, so attracting the best price, as companies provide offers.

This is only possible with well established and known corporations willing to sell to the bond, the world of commercial supply is riff with fraud, phantom companies are created simply to steal across every field of supply, often out numbering actual true supply companies.

When a true supplier is found, the cost of shipping is reduced, as either a cooperative can be formed using the bonding platform, or a deal can be established from a single delivery company, allowing better rates.

The purchase will presently be taxed directly from the manufacturing corporation, VAT can be removed for exports, and taxed again if it is brought through a port, this cost will be the basic amount, as the goods are not sold forward.

The quality of the goods will also be controlled by the collective, samples can be examined, or better materials or design demanded from manufacturers.

How to Form the Bond

Any bondsman on the platforms can create an economy of scale bond, the platform generates a template and they simply determine the parameters they require.

The number of bondsmen required to make the bond live would be determined, this means for example, if you wanted to buy a car, and you set the minimum at 100, then when 100 bondsmen joined the bond, who also wanted a car, it would become live.

The catchment area of the bond is set, for example the entire planet, the whole country, limited parts of a country, or a local region, practicality would determine catchment, no good having a global catchment for cars as this would make shipping difficult, better to limit it to a state fiefdom for that application.

The maximum amount you are willing to pay for the new car is set, for example £25,000

This means the collective will as a minimum buy 100 cars, but if the bond is popular it may buy 1000 cars or more, the more bondsmen that join the bond, the better the deal can be made from the manufacturer.

The time the bond runs is also set, for example you set the bond to run for 6 months, at which point the bondsmen within the bond seek offers from car manufacturers. For example BMW, Audi, Volvo, Jaguar, Toyota, Mercedes etc., are asked to provide an offer, these offers are then considered by the collective, when a consensus is reach, as to what is considered the best offer, the purchase is made.

The manufacturer may offer several models or options, and the individual bondsmen would then determine if they wished a more expensive model, added extras like alloy wheels, leather car seats, built in water slide, whatever the manufacture allowed, and this would determine what their individual cost would be.

Bondsmen can continue to join the bond right up until the point the order is finalised with the manufacturer.

An economy of scale bond can be formed for any “need”, for example televisions, or carpets, wallpaper, anything you wanted, as long as that need was required by others, then the bond could be completed.

This is consensus driven, and not democratic, if you felt your were against the consensus, you could simply establish a new bond with options you preferred on the bonding platform, but until a full consensus was reached the bond would not advance.

This model could even be applied for small items, like chocolate, in such cases you’d have to set the amount of chocolate at the outset, for example 20kg of chocolate bars.

The golden rule of this type of bond is, you CAN NOT buy on the bond with the intention of selling anything forward. Ideally anything traded after a period of use, beyond the warranty period, as used second hand goods, that you’ve bought through an economy of scale bond would be traded through the closed bond trading platform, and the trades kept within the bond.

Why can’t I sell forward, and “make a profit”, you may ask, firstly when you join the bond you have agreed not to extract the labours of another, meaning to gain without reciprocation, no usurious interactions. Secondly this would cause State corporate mafia issue, of demanded taxation and license, regulation etc., depending on the type of goods involved.

It may be an advantage to avoid large corporate entities when selecting some goods, for example gaming computers, lets say you want to form a bond to buy gaming computers, within the bond you set the parameters of the computer, 2TB of SSD memory, 128 GB Ram, Intel® Core™ i9 10900TE Processor 10 core, NVIDIA GeForce RTX 3090 DirectX, this could be a desktop or a laptop, but it may be better to seek small manufacturers for offers, as the parts are from many different manufacturers, so you are actually seeking assembly, this assembly could also be done as a cooperative bond, then the offer would be from the manufacturers of the various parts.

Bonds can even be created that would require development, so offers would be as a commission for a new product, or the manufacture of parts of a new product.

Lets say you wanted a conversion system for diesel engines into a Papp engine, the first requirement would be a technological development hub cooperative, this would design the product itself, open source within the bond, once a working design is developed then either cooperatives are formed to manufacture the parts, or offers are collected from corporation or companies for component manufacture, and installation cooperatives could be formed to convert you car, wagon, bus, plant engine, or as an electrical generator to allow free electrical energy.

The cost of the technological hub would be a shared burden proportionately spread across all those utilising the specific technology developed, this would be initially a set amount, but that set amount would be partly reimbursed once the original cost was fully paid, as each additional utiliser of the technology within the hub paid a diminishing amount until the point the cost is equal to 1 crypto coin, at which point it would be considered paid, so free to all beyond that point.

Any repressed technologies could be developed as economy of scale bonds, seeking quantum entanglement internet and mobile telephone connection, which has no signal, can be designed to provide any speed of service, has no radiation of any sort, works instantly even on the other side of the universe, uses almost no power compared to a signal based system, cannot be tracked, monitored, intercepted, blocked or taxed, a free service once the technology was installed, connecting as a polycentric network needing no centralisation, and as it would be anarchic in structure no state mafia could seek taxation, or control. Once the technological hub had developed the technology local small scale cooperatives could quickly be developed to provide the technology.

Paying for the Goods 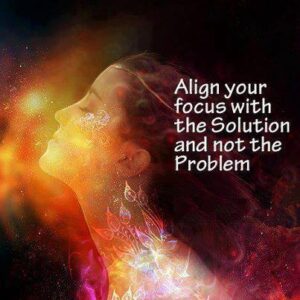 Once the advancing platform gains traction, and people in large numbers are using it, their would be a demand to convert fiat into the earthcoinage cryptocurrency within the closed bond, because the paedophile class are presently attempting to crash the global usury economy, in order to form new monopolies, extort more resources for themselves and bring in totalitarian (communist) enslavement globally. The fear, and desperation, as the value of fiats crashes, generating hyperinflation, means a stable store of value, like earthcoinage, would become popular, this allows advances to be used externally to the platform.

At this point, you can buy a car for example as an advance, as long as you can gain external guarantee of three months repayments of depreciation from your surety, a new car depreciates, the average car is built to last 8 years, but some cars like the Toyota Tacoma are built to last 15 years, and this would be factored into the depreciation costs annually. Any large advance given for something that stores labour, suchas a home, or vehicle would be advanced against the stored labours in that purchase, so would require only the loss of those stored labours to be repaid as time passes, as the stored labours can be recovered from the sale of the original purchase at any time, only the deprieciation would be needed to cover the repayment of the advance, interest and fee free. This is possible because the ctyprocurrency has a fixed value against purchasing power to any and all external fiats, which is possible because the cryprocurrency can only be traded on the platform, and not by any third party parasites, and the platform calculates the value of fiat against consumerable commodities.

The development of much more advanced vehicles could be developed using a cooperative by empowering the technological hub to develop the technologies for small scale collective cooperatives to work in unison to build cars, or heavy goods system.

HGV would be better air born than road shipped, ideally a papp engined, quad, tandem rotor helicopter which could be engineered to carry one, or more 40 foot containers, using a quck clamping basket. The Papp engine uses no fuel and has many many times the power of any diesel or petrol engine, and would move goods at an average speed of 160 mph, this means it would take around 45 hours to collect and deliver a 40 foot container from China to the end utiliser in the UK. This would allow very cheap shipping costs.

Containers would be delivered direct to the end utiliser without the need for ports, roads, airports or pilots, as the containers would be shipped along routes that avoided populations as much as possible, over oceans, rivers, lakes, forests, mountains, deserts, etc. flying low to travel faster, and with computer systems that monitor obstacles, terrain, weather and other traffic within a local vicinity. No need for a living pilot as the helicopter only carries inanimate goods away from populations.

Cars could be engineered with matrix based airless tyres, carbon fiber car bodies, real leather seats, or some other high lifespan material, Papp engines, carbon fiber roll cage and additional extensive carbon fiber reinforced design, to protect the passengers against injury from collision. All engineered components would be designed with longevity in mind, over engineered with a view of lasting the maximum before replacement. This would be a car designed not to rot, breakdown or cost much in maintenance.

Other technologies could be persued, anti gravity, reversal of aging, erradication of all dis-ease, all easily possible if you remove parasites, hierarchy and monopoly.