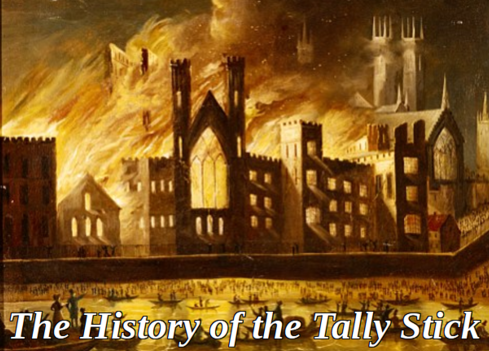 In England, tallies took on the characteristics of today’s credit card system, as lenders carved out the details of the loan using a system of notches, to signify denominations on the surface of a small squared willow, pine, or hazel- wood stick.

At the top of the tally, a cut the thickness of the palm of a man’s hand was made, representing one thousand pounds, then subsequent cuts were made to designate other values. The breadth of a thumb meant one hundred pounds, the width of a little finger represented twenty pounds, the width of a barleycorn translated to one pound, and so on. The stick was then split in half lengthwise through the center of the carving, creating a “split tally,” which prevented either user from adding notches to his half of the tally stick. (this is the same concept used with E.A.R.T.H coin, the two data streams are compared for a zero balance to see if they tally, one stream holds the guarantor data the other stream holds the advances of labour coin data)

Each party to the transaction was given one half of the marked tally as proof. Because the type of wood used to create the tally was selected for its clear grain, the grain of the wood when halved would be perfectly matched, fraud was difficult to perpetrate, and refinements were added over time to make the documentation of the transaction virtually tamper-proof.

The two halves of the stick were made different lengths, with the Lender given the longer part of the stick, referred to as the stock, which formed the basis for the modern term “stockholder” while the shorter portion, called the foil, was given to the party who had received the goods or funds. Literally, the debtor received “the short end of the stick.”

The earliest known tally stick is the ‘Ishango Bone tally’ made from the thigh bone of a baboon, and dates from around 18000-20000 BC (Upper Palaeolithic). Historical reference is made by Pliny the Elder (AD 23–79) about the best wood to use for tallies, and by Marco Polo (1254–1324) who mentions the use of the tally in China

The Crown Corporation government mafia first began using the tally stick around 1100, and their use was ended in 1827 as a method of debt and credit management, that role was, from 1694, taken over by the private bank of England.

In 1834 the stock pile of now defunct wooden tallies were used to burn down the houses of parliament.