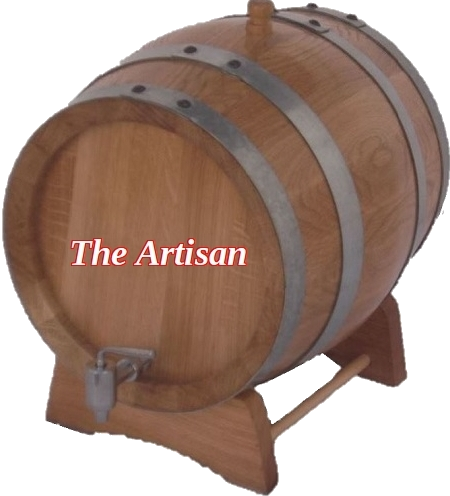 The Artisan Cooperative and the Need Bond

An artisan is a skilled artist, who trade their skilled creations of high-quality distinctive works, that are both aesthetically beautiful and practical functional.

Not everyone wants to be an artist, some are happy simply to labour, free of the responsibilities of skilled work, and it’s a free choice to do whatever you choose.

For anyone with a soul, it’s vital to create things of value, even those who simply wish to labour, even they must feel it has value. But for some value alone is not enough, they must also create with skill and beauty, to create deeper value for others, so making the job a pleasure, not a burden of toil and drudgery, turning life into an existence of suffering, where waking to face the day is a misery and you watch the clock until you may leave, in waged slavery.

Life crafts were common in the past, where people possessed many skills that allowed them to provide for themselves directly, if needed.

The modern situation is much different, this wide range of craft skills has been replaced with specialisations or no basic craft skills at all. Can people grow their own food, make cloth and clothes, build or maintain shelter, administer basic medical care, defend themselves effectively?

There were over 200 Artisan skills required to make a Victorian town functional, if you go even further back in time, to before the genocide committed by William the Bastard and the Vatican, the entire population of Britain were artisans, famous across Europe for their unparalleled skills and craftsmanship.

An artisan needs no paper certificates, no examination or State license.

To become an artisan, all that is needed is to find yourself a position as an apprentice, by forming an arrangement in which a master of an art, or trade, is willing to train a new generation of practitioners of a trade or profession with on-the-job training. This typically takes about four years to complete.

This arrangement was abused in the past, where the master craftsman would exploit his position and basically enslave the apprentice through indentured servitude; at its worst this was a contract to work without payment, or for almost no payment, for a specific number of years.

Inherently of course you cannot enter contract, and may only form reciprocal bond agreements, so these abuses would be impossible outside of the imposed usury monopoly model of economic slavery.

Contract is a contraction, a reduction of agreement, allowing one-sided agreements, this cannot be entered by a soul inherently, so they invent a straw man, the representation of a soul by a constructed legal fiction. This allows contract to be imposed both deceptively and without the consent of the victim, such as statute or legislation, being the internal policy of a corporation, this can only apply to, or bind the property of the corporation.

A soul can only enter reciprocal bonds, which require a seal, a physical imprint, like a thumb print, and witness seals, to bind, and must be reciprocal, meaning it involves equal or equivalent exchange between the two, or group, forming agreement.

Many of the crafts needed in the Victorian period are obsolete, as new technologies have developed, and many old skills are now far more efficiently done with industrial computerised production.

In this situation the artisan is the source of production not the means, they create and the industrial engines produce. An example of this is in stone or wood carving, were a CNC (Computerised Numerical Control) machine can copy an original work flawlessly over and over, the artisan then only need create the original work and possess the skills to work the machinery.

Unemployment is a construct of the resource monopoly model of usury extortion, a required element to repress earnings and hold people in poverty to better dominate and exploit them. There is never a shortage of work, in the usury system there is only a lack of available money to allow it, this is not the case in the community, no money monopoly restrictions exist, the advancing of cryptocurrency will become available as the platform is coded, or could be done locally using a micro version as a written ledger within a local community, this would be a slow option compared to an online system.

Textile crafts have been heavily industrialised, and machines do the work of thousands, in such a situation the artisan is the creative and technical force behind the mechanical mass production, however there still exists a need for crafted garments, tailor made to fit exactly. This means there will always be a need for some workshop artisans, a tailor, seamstress, milliner, hatter, leather worker, etc.

Industrialisation has freed time up for people, and this continuing process allows people to end the drudgery and suffering of menial repetitive labour. Many jobs in the present system exist solely to allow the paedophile class to possess lucrative monopolies, if an alternative is created those parasitical monopolies would end, for example millions labour in the energy industry, mining, purifying, transporting, selling, and manufacturing products to supply various forms of fuels to burn, to produce power.

Power should be produced at the location it is needed, this would end the centralisation of power generation. Power needs no fuels to be generated, it only needs an advance in technology, these advances have happened in the past, several times over the past century, but money monopoly shuts down these advances, but these suppressed technologies can be redeveloped and disseminated globally open source, within the closed bond model.

Some monopolies have been heavily centralised in order to extort and control, such as the Internet and telecommunications. The technology of quantum entanglement is now advanced enough to be developed to replace the microwave polluting technologies of the monopolists.

Quantum entanglement technology would be without any signal, as the entangled particles communicate directly no matter the distance or location instantly, allowing an Internet connection as fast as you like, a thousand times faster than 5G if that is the desired speed of data transfer.

A new version of the Internet could then evolve in parallel to the existing hierarchical, contaminated, regulated, parasitically structured and censored Internet, replaced with a peer-to-peer structure, where the website creator hosted the website on their own system, no parasites demanding hosting fees, website name rental, no monthly Internet company payments, metered and unreliable.

The paedophile class will never themselves develop these technologies and have worked hard to prevent them, the earth is raped and polluted simply for the profits of the parasitical paedophile class.

There are no resource shortages, the shortage is in common sense, and that shortage is the real issue. People believe every lie of the paedophile class, deeply invested in the virus scam, the climate change scam, the nuclear weapon scam, the germ theory medical system scam, these scams are made possible because many scientific foundations have been corrupted, replaced with lies, that if common sense dominated would easily be exposed.

Community is dichotomous to hierarchy, this means what exists in one cannot exist within the other, for millennia the paedophile class have purged those who could reason; no reasoning soul would willingly suffer any form of hierarchy. Likewise community must purge those who cannot reason, who by definition are unreasonable. You cannot form any true community with those who cannot reason, therefore to join the closed bond, a simple test would be created to determine if the one seeking to join the bond, can reason to truth.

Some ancient crafts still have value in community, even though, these too have been industrialised, the benefit of some of these crafts for the maintenance of the forests would outweigh the benefits of industrialisation.

The artisan can further specialise their skills if they desire, creating a workshop as a toy maker, or costumer, or prop maker etc. A potter could specialise in sanitary wear, or garden pots, tile making, ornaments, or kitchenware, etc. In this way several artisans possessing the same skill set can function within the same community.

Many of these old crafts may no longer be as relevant as they were in yesteryear, and new crafts have developed that did not exist in the past, such as coder, film maker, electronics engineer, metallurgist, permaculturalist etc.

When a cooperative servicing bond is formed there is no management element, no employer or employee, no supervisor, no foreman, and no marketing, these elements exist only in the usury structure and are parasitical and provide no true benefit.

The need bond creates the infrastructure for the artisans through the bonding structure, they have no need of capital outlay, they have no interest payments to a bank, no customers to attract, as the ones with the need create the bond at the start, no employees, no landlords, no mafia tax.

The farmer’s market is set into the earth, the artisan workshops are built into the ground and majestic forest sits upon them, this provides protection from the elements, prevents the landscape having an eyesore of boxes littering it and increases the arable land, not consuming it.

The immediate goal of the bonding platform is to form a technological hub, were artisans with a variety of skill sets, such as electronic engineers, mechanical engineers, tool makers, metal casters, coders, etc come together to develop new or repressed technologies, and when perfected to a point they can be created within communities, then myriad cooperarives forming a network would be generated, using these technologies as their foundations.

These new technologies would be generated through need bonds, so forming local cooperatives servicing bonds. These servicing cooperative bondsmen would be trained either on site or virtually on line, all information they require freely given open source to all, with the full support of the hub technological bond in the creation of these diversely located cooperatives.

Improvements and advances discovered by the cooperative bonds, applying or manufacturing the new technologies, would also be shared across all bonds open source, there being no competition, only cooperation.

The need bond model is networked, so for example, if you join a bond locally that supplies cars driven using the Papp engine, which requires no fuel and is many times as powerful as a diesel or petrol engine, and other communities built cars in similar need bond structures diversely across the earth, then you would have access to all similar need bonds, and could for example, buy any design of car across all those similar bonds, with the additional cost of longer shipping distance.

Or, for example, a healing bond, so even if you were in distant lands, as long as there was a healing bond near you, you could use that bond.

The need bond  platform uses an accounting system, which can account for all variations across the bonds, and transfer the proportionate cost for those accessing a different bond to the local one, which they’re bonded to directly.

This means the annual cost of the need bond to cover the depreciation of infrastructure and equipment, draws the amount proportionately from the bondsman accessing the need bond, that is not directly in the bond, as a additional need bond payment proportionate to utilisation. This along with the direct costs for the service or products the bondsman requires, is determined through the accounting system that would calculate the cost, free of profit, fees and interest.