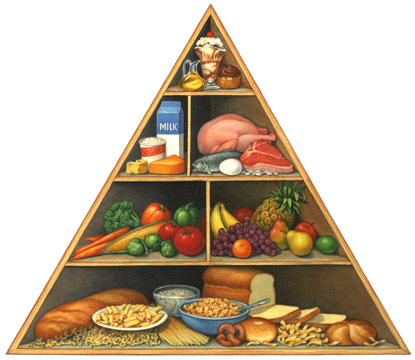 Worldwide obesity has nearly tripled since 1975.

In 2016 6% of girls and 8% of boys were obese. This is accelerating, now even children under 5 years of age, that in the past were never obese, are suffering obesity, in 2019, an estimated 38.2 million children under the age of 5 years were overweight or obese.

In 1974 Sweden, Anna-Britt Elisabet Agnsäter b.1915, invented the diet/food pyramid, as the head of the national cooperative supermarket, Coop Provkök, to promote the high profit grain based products, which were very cheap to manufacture. The idea of the food pyramid was soon exported to a number of other countries, it has absolutely no basis in any scientific study, data, or research but simply reflects the emotional or financial prejudice of the creator, who may have believed wrongly that fats were unhealthy and carbohydrates healthy, or simply wanted to increase profits. The food pyramid is the wrong way up as a guide to healthy eating, so advises the direct opposite of reality.

If you reduce healthy fats and increase unhealthy fats while following the food pyramid, you’ve formed a recipe for health disaster. The medical mafia and govern mental systems promote the most unhealthy fats, while simultaneously attacking the reputation of healthy fats, some fiefdoms even legislating to prevent or financially penalise healthy fat use, while aggressively promoting the food pyramid. This can only be, from the evidence of the actions of the agents of these institutions, a callous premeditated plan, to further a disease generation and depopulation agenda.

Cultural differences in diet, which determine what type of fats are consumed, explains the death rates, which can vary widely by location, for example 23% of Russians and 23% of Norwegians are obese, yet Russia’s death rate is four times higher.

Obesity is one of the leading risk factors for premature death. It was linked to 4.7 million deaths globally, (8% of global deaths) in 2017.

Presently 13% of the earth population are clinically obese and 39% are over weight.

The advice, for those who are over weight, from the licensed medical quackery, is to reduce calories, while increasing exercise. As you reduce calories you will begin to lower metabolism, at the start you will lose weight, but very quickly that weight lose will stop, and you may even begin to regain weight with reduced calorific intake, as your metabolism has slowed and your energy levels have dropped, making exercise harder. The medical advice is to further reduce calories linked to the “healthy” eating food pyramid, this again lowers metabolism and reduces energy, and after an initial drop in weight, the victim will again fail, with weight gain and even lower energy.

The efforts of the over weight victim can never succeed with such bad advice. The obese victim is blamed for the failure by themselves, the doctor and all concerned, yet it was the incompetent advice of the doctor, and the belief by the victim the doctor is educated and has studied the subject based on evidence and with reason, of course almost no doctors has even a rudimentary education on how the human body functions, let alone have the ability to know how to reason, and that caused the failure.

The disaster of grain diets begins earlier than the food pyramid.

Seventh-day Adventism and breakfast cereal are inextricably intertwined. It began when a team of Seventh-day Adventists began to develop new foods to adhere to the vegetarian diet recommended by the church. The first successful product was created by William Kellogg in 1894 who invented corn flakes and created the Kellogg Company, but many other grain based breakfasts soaked in milk soon sprung out of the Adventist vegetarian philosophy.

Breakfast is touted as essential,”the most important meal of the day”, by the medical quackery, there is no experimental evidence to substantiate these observations at all. However there is ever growing experimental evidence suggesting that consuming a breakfast rich in protein and fibre, not in carbohydrates, has very beneficial effects on the body, in positive weight management and cardio-metabolic health.

Cereals are around 2%- 8% protein, 84% – 89% carbohydrates (sugar). There are three macronutrients: carbohydrates, protein and fats, healthy eating would be high in natural fats and protein and low in carbohydrates, that reality is reversed when advice is issued by the medical institutions.

The body can’t store excess protein, so excess is metabolised, a high-protein diet has beneficial effects on whole body metabolism, and increasing metabolism is essential if you want to reduce body mass.

Fats created through solvent processes should never be consumed, these grain oils are rancid, and should be identified as food like substances, these can be increased in toxicity through hydrogenation, this results in trans fats, which are even more inflammatory.

Inflammation is the result of cell death, there are four basic ways for cells to die, toxins, toxins such as solvent extracted and hydrogenated oils, electromagnetic pollution, starvation from nutrient deficiency, and stress or erroneous belief, as belief is a powerful force on health.

The satiating effect after a high-protein intake is significantly greater than intake containing carbohydrates or fats, the most important aspect of high protein diets is digestion time, limiting the intake of protein, fat, and low amounts of carbohydrtes, ideally no more than 50 grams a day of carbohydrates, within an 8 hour window in every 24. This allows the body to safely process the high levels of protein.

Red meat and fish can take as long as 2 days to fully digest, whey protein digests rapidly at 10g per hour, taking between 1 to 2.5 hours to pass through the absorption region of the gut, which means whey protein should be taken in small amounts at set intervals of 2 – 2.5 hours if you want to gain muscle mass.

Changing bad habits is a challenge as people browse feed from waking to going to bed, and it takes discipline to form good habits, but once new habits are ingrained they become easy.

Fats take the longest to digest, and protein digest more slowly than carbohydrates. If you are more interested in building muscle and do not have excess body fat, the percentage of carbohydrates could be increased, as high levels of exercise would burn off moderate amounts, but it should never proportionately be greater than protein or fat intake.