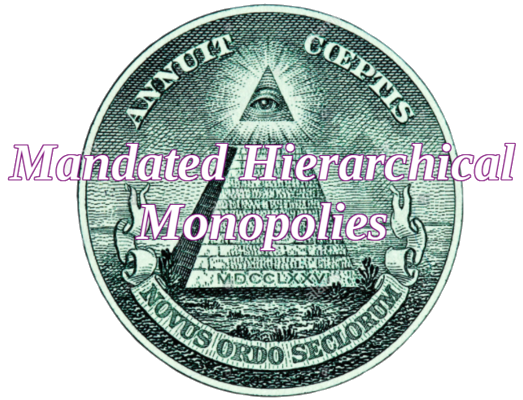 Govern mental mafias must form monopolies in order to remove comparison, if any comparison existed, it would easily and clearly expose, that the imposed monopoly was relatively worthless. All governments control the market in which they do business, meaning that they don’t have any competitors, all governments are corporations, for example the British government is UK PLC, a public limited company, all government function “exactly” as a mafia.

Government is the epitome of monopoly, the services government mafia impose are many times more expensive than the same service provided independently, monopoly stagnates innovation, pays no price for being inefficient, unreliable, poor quality or incompetent in the providing of services, these are the cost of imposed market exclusion.

If we consider waste, going back to a point waste was not a mandated monopoly, in the UK people were “paid” for their secondhand goods, that was redefined by the State mafia as waste.

People earned a living collecting and “paying” for various kinds of “waste”.

Households used a slop bucket, where all food waste was placed to be collected daily, and “paid” for, used to feed pig and other farm animals. Coal ash was collected for Victorian dust-yards, coal ash was in demand by the brick industry for brick making (also used to make breeze blocks in the modern age), this was placed outside for collection in a “dust bin”, it was also in demand from the food and agricultural industries.

Rags (old clothing) used to make paper, and bones used to make glue were paid for and collected by the rag and bone-man, who also collected and paid for metal and old household items.

Waste has value, unless that waste is monopolized for another purpose, the States purpose is revenue extortion.

Plant and animal waste can be composted, generating methane gas, heat and ultimately valuable organic fertilizer. Building waste has value, old bricks and stone can be reused, or crushed for hardcore, or in the manufacture of new bricks.

In the modern age plastic can be reused or more sensibly converted into gas, diesel, and carbon black, using thermochemical conversion (pyrolysis), this same process can be applied to old tyres, even wood.

Let’s consider the present mandated monopoly imposed by the govern mental mafia, waste in the UK is collected every two weeks to be dumped in landfill. This monopoly is further abused to allow fines to generate mulct, waste is mandated to be cleaned and separated into various types, under the fiction of recycling, (a tiny amount is sometimes recycled if profitable), failure to follow these dictates by the home owner allows revenue generation for the council; these recycling claims are largely fictional, as waste is collectively dumped into landfill or incinerated.

The “council” charge people to collect their waste, a powerful contrast to the previous organic model, at an average cost per 240 liter bin of £22.40

According to the Break Free From Plastic Movement, Coca-Cola, Pepsico and Nestlê were the three largest polluters of plastic in the world for 2020.

At least 8 million tons of plastic end up in our oceans every year. Floating plastic debris are currently the most abundant items of marine litter. Waste plastic makes up 80% of all marine debris from surface waters to deep-sea sediments.

The vast majority of Great Pacific Garbage Patch material is plastics— trawling samples indicate an estimated 99.9 percent of all floating debris. This is estimated to span 1.6 million km2.

Another estimate is slightly lower claiming only 14 billion pounds (6,363,636 tonnes) of trash-most of it plastic, is dumped in the world’s oceans every year. Over half this plastic is less than 60 mm- or a quarter inch. Link

Approximately 70% of plastic sinks to the bottom of the oceans.

It’s estimated that plastic takes on average 1000 years to decompose, and is presently dumped in landfill, only 6% is recycled before it too would end up in landfill.

In the UK they have reduced landfill dumping by incinerating the waste, this is then claimed recycling.

The UK mafia extorts for deposing of waste with the average landfill gate fee for non-hazardous material for UK landfill disposal, around £120/ tonne in total, including the standard rate of landfill tax in 2019 which is £91.35 a tonne.

Any mandated monopoly can be examined and would demonstrate exactly the same worthless nature. The State mafia turned an organic model, that paid the population to take away unwanted materials, did not dump it but used it practically, caused no pollution, into the present model.

Railways formed a network of independent companies across the UK, they were very reliable, convenient and affordable,  running on time was all part of their proud service, they were very cheap to use, and had two basic classes of service available.

Now contrast this to the modern railways, after mandated State control, with the objective of ultimately progressing to be transferred into a corporate monopoly for direct benefit to the owners of the State mafia, I do not need to tell anyone how insanely expensive, slow, inconvenient and unreliable the UK railways are.

Health care is a confusing term to apply to state sanctioned medicine, to be health care it would need to reduce dis-ease and death rates, but modern health care does the exact opposite, when the medical system is closed down death rates drop by around 50%, banning pharmaceuticals would reduce dis-ease and death rates even more than that, modern health care is a symptom repression and dis-ease generation model. The very foundation of allopathic mandated medicine is a fraud, germ theory, and the complete fiction of viruses, are laughably transparent nonsense, yet an ocean of, claimed intelligent people gain doctorates of those nonsensical frauds.

Link: The Nature of the Hospital system

State mandated monopoly is always a transitional monopoly, the owners of the State Corporation always want to form an independent corporate monopoly, generally once the State mafia has the monopoly, these services are run into the ground by the State to give justification for corporate take over, this allows the owners to buy the monopoly very cheaply, then increase the costs of the service, while reducing investment and quality to a minimum, allowing huge profits.

Mandated monopolies are not exclusively for State take over, mandates can allow corporate monopolies directly, for example car insurance in the UK, or TV license.

Monopoly can only exist as long as no alternative is formed to compete, and more importantly be compared to that monopoly. There is no other way to end monopolies, except to form alternatives, you cannot change the nature of mandated monopolies.

On this website I present a complete model, which through a closed bond gives an alternative to government, ownership, usury, banking, and so economic slavery.

The alternative reverses the structure of monopolies, the need dictates production not capital monopolists, trust allows advance of a medium of trade, not usury banking, bonds of behaviour determine allodial utilisation of the earth and her resources not corporate fictions.

Examine the past, and consider the present to determine the future.

The state mafia seek tax for waste, the need bond does not have any waste, it take secondhand materials and separates them for resale, or uses thermochemical conversion (pyrolysis), to break materials down in to saleable materials, of gas, oil and carbon black, with tyre pyrolysis high grade steel is also recovered.

The crushing of concrete to recover the steel reinforcing, and making hardcore, the composting of animal and organic waste to generate methane, and high quality fertilizer. Nothing is waste, subsoils can be used to build up existing subsoils, top soil can be cleaned, etc.

The value generated in trade of the secondhand materials after the costs of processing those secondhand goods, is proportionately shared with reference to the type of secondhand goods supplied back to the originating need bondsmen.