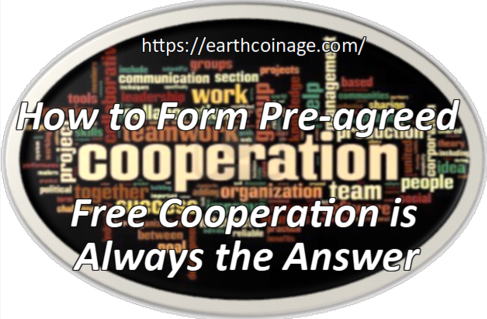 The answer to isolation is always free, unconditional cooperation!

Presently the owners (paedophile class) are working to destroy every small business globally using a pandemic fraud, but pre-agreed cooperation is the easy answer to that abuse, joining together verbally, or through a written bond of reciprocal agreement, with a single mind or objective.

If in united cooperation people open their businesses in the face of the govern mental mafias demands; demands designed to bring about widespread bankruptcy, in order to allow the four global conglomerate corporations (which represent 96% of all corporations) greater monopoly.

When costumed clowns of the govern mental mafia attack a business directly, that’s ignoring the mandated abuse they wish to maintain, locally cooperating as one mind will prevent them from action.

As soon as the costumed clowns (government agents) arrive, a call is sent out and everyone in the cooperative, that is able, drops whatever they are doing, and goes directly to the affected business.

The costumed clowns fear large crowds as they expose their true weakness, a large motivated crowd can easily protect the business, and it makes it very difficult for the costumed clowns to act against those disregarding the criminality of the imposed govern mental mafia.

Reason can be applied if possible, providing the costumed clowns with proven evidence, that exposes the now open and laughable claims of the state mafias. But a human wall is maintained to prevent the costumed clowns from access or theft, kidnap or violence. It is made clear no one is interested in contracting with the clowns of the state mafia, and they should go forth and lick the boots of their owners until they shine.

If the costumed clowns are armed and pose a danger, it becomes very difficult, the clowns believe they can murder without any accountability, and within the present legal system they are right, any murder by an agent of the govern mental mafia of a slave (a soul without any rank) is dismissed by the owners and their system of control.

Imagination can be applied to this problem, maybe in advance metal interlocking walls can be manufactured by the group to surround and isolate the costumed clowns, allowing them only one route of escape. These can be used to push the psychotic clowns away from the area. Maybe other ideas could be considered, however in my view leave the monopoly on violence the govern mental mafia possess, with them, violence gives the owners propaganda. The owners commonly use agents provocateurs to fabricate violence, if a group is peaceful, to then justify the violence of the costumed clowns of State at a future date.

Every business within the agreed cooperative posts a sign prominently outside the business stating that they refuse service to anyone employed in any capacity by the govern mental mafia of State. You cannot allow those working against something to take advantage of it. (Ideally post a sign that “Refuses access to the public”, allowing only those who have joined the closed bond online to enter, and ideally not to use the govern mental states fiat money monopoly but the advancing cryptocurrency exclusively.

If at the start the cryptocurrency is not coded, then I.D could be demanded for those unknown to the business owner, that seem suspicious, and checked online to determine they are not employed by any govern mental mafia, if they wish service. Even photos of government clowns could be displayed or available for the business owner to check of local clowns.

Again if the cryptocurrency is not coded, then every business in the agreed cooperative takes only cash, refusing to take credit cards, which the owners are presently working to replace, ending the choice of using the cash systems, eradicating cash and allowing the transition to a digital debt monopoly.

How to Create an Agreed Cooperative

Newspaper ads cost around £1,000 for a local newspaper to £30,000 for a national paper per full page, join together as a cooperative effort and fund a full page ad, using only referenced evidence, present the reality of the pandemic fraud, giving the reader links to open on their internet that will allow them to link to evidence directly online.

Give evidence that exposes the pathogen generating cocktail labelled ‘a covid vaccine’, including a detailed description of ingredients and what they are proven to do within the body.

Truth is the kryptonite to the psychopathocracy!

Provide a link to join an agreed cooperative, forming a reciprocal bond, where the reader can access massive amounts of information to expose the many lies of the state govern mental mafias. this is how simple it is to end the govern mental mafia’s domination.

As you are only providing truth, evidence based, and provable, nothing speculative, it would be very difficult for the owners to prevent you from publishing in newspapers. The linked website could have all the information fully detailed.

NO one should pay any taxes, and once the cooperative is formed, just as they would stand together when the clowns turn up to close down a business, they could stand together against the govern mental mafia when any costumed clown turns up wanting to contract with any straw man, in an effort to extort through the threat of violence, seeking mulct, tax or offerings.

Take back the land from the owners of the govern mental mafia and the “stupid” they employ.

If an advancing cryptocurrency is coded, as a 100% advancing model, always with an external guarantee attached, peer to peer, and key pair encrypted, and completely free of any fees or interest of any sort, then the alternative to the paedophile classes monopolies has a solid foundation. No business need take fiat cash or digital banking fraud, they can take the cryptocurrency designed as the earths first true medium of exchange, as it has a fixed value linked to purchasing power. This ends inflation, boom and bust, resource restrictions, ect.

Platforms can be coded to add to the main cryptocurrency platform, allowing a system to be built completely free of every and all forms of hierarchy.

Once this is in place, technological hubs can be created to develop previously suppressed technologies, and to develop new technologies, all open source, employee and employer would no longer be an acceptable model within the closed bond of the cooperative, and the need bond in union with the cooperative service bond model would take over, this would allow you to gain many times the value presently earned within the usury model, once all forms of usury are removed the value of labour would increase 10 fold, additionally the earning within the bond are again 2 to 3 times as much as the usury employee, employer (master/slave) model, which effectively transforms earning to 20 to 30 times in purchasing power the present usury model. Quality is improved in services and goods, longevity is the focus of production, no more engineered redundancy or suffering the Chinese not fit for purpose production methods.

If we do nothing!

The ten stages of genocide, repeated throughout history, and following these basic concepts, but with variation on application:

The objective of depopulation is a commonly stated one of the wealthy, expressed by every powerful psychopath from Bill Gates, to Boris Johnson. Disease is now more prevalent than ever before with around half the global population suffering a chronic disease, the massive increase of disease stands in stark contrast to the narrative of the wealthy who dominate all media and governmental mafias. To be a billionaire means you are a greedy, selfish, parasitical asshole, their is no other avenue to wealth generation of such scale, however the majority worship such psychopaths as gods; a reality of the power of social engineering they inflict as a group.