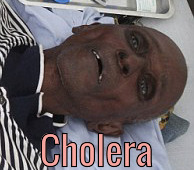 Zinc is the second most abundant micronutrient in the human body after iron, zinc is essential for various cellular processes such as differentiation (processes by which immature cells become mature cells with specific functions), apoptosis (a method the body uses to get rid of unneeded or abnormal cells), and proliferation (the growth of tissue cells), which influences growth and development of an organism. The importance of zinc homeostasis (equilibrium of physiological processes) is highlighted by the remarkable number of diseases associated with alterations in tissue zinc levels.

As there is no dedicated compartment for zinc storage in the human body, zinc has to be continuously replenished by dietary intake.

According to the World Health Organization (WHO), one-third of the world’s population are at risk for zinc deficiency.

Cholera occurs as both outbreaks and chronically in certain areas. Areas with an ongoing risk of Cholera include Africa and Southeast Asia, areas were the population tend to suffer imposed poverty and poor diets, or where there is a lot of mining. The risk of death among those affected is usually less than 5%, but may be as high as 50%.

Cholera is a preventable, acute diarrheal disease that leads to severe dehydration due to a massive loss of bodily fluids that can lead to sunken eyes, blue-grey skin and eventually death if untreated.

Victims also suffer painful muscle cramping and weakness due to loss of potassium, sodium and calcium.

Every year 3 to 5 million people around the world are affected by cholera and 100,000- 120,000 people die from the disease (deficiencies), according to estimates by the World Health Organization (WHO)

The physical reaction to a deficiency of zinc and retinol (vitamin A) is claimed a bacterial disease and attributed to a bacterium called Vibrio cholerae, or simply V. Cholera. This harmless bacterium flourishes in warm water and is commonly and widely consumed harmlessly by vast numbers of people, through intake of food and water.

The first Cholera vaccine was concocted by Louis Pasteur in December 1880, Pasteur presented his results to the French Academy of Sciences, where he claiming that the bacteria were weakened by contact with oxygen. He explained that bacteria kept in sealed containers never lost their virulence, and only those exposed to air in culture media could be used as vaccine.

Pasteur introduced the term “attenuation” for this weakening of virulence. His vaccine was later proven to have absolutely no beneficial effects or give any protection against Cholera at all.

Cholera vaccines claim to give protection against cholera for the first six months after vaccination they claim to provide about 85 percent protection, which decreases to 50 percent or 62 percent during the first year. After two years the level of protection decreases to less than 50 percent, of course these claims have no actual evidence.

The fraud of the chicken cholera vaccine by Louis Pasteur, was used to validate work in infectious diseases and can be considered the birth of the fraud of immunology. In fact, Pasteur’s vaccine against chicken cholera was a complete failure.

The reason immunology is a complete fraud is simple, there are five ways to develop disease, toxins, deficiencies, certain enzymes, stress and belief, belief being the most powerful, none of these causes can be immunised against.

No study that includes Pharmacodynamics and pharmacokinetics exist nor any evidence of specific inoculating antibodies (if indeed such a thing exists) created through vaccination.

It is claimed vaccine reduces the risk of getting sick with cholera by 65-75%, this is of course an easy figure to invent, as if the vaccine does nothing, all cases of vaccinated patients who contract cholera are claimed within the 25-35% group, but in reality they are just those within the community who contracted cholera as equally unprotected as the none vaccinated.

California-based vaccine manufacturer PaxVax has reportedly submitted an application to begin international trials of a novel oral cholera vaccine that contains live, genetically modified (GM) bacteria. VacTruth.com reports that the new vaccine is set to be tested on more than 1,000 individuals, many of whom are young children, in a three-part clinical trial series to take place throughout Australia.

In a recent application filing with the Australian Government, PaxVax makes plain its intent to administer the live, GM bacteria in both young and old and in every region of the country. Participants will be instructed to literally consume a cocktail of mercury-resistant, GM Shigella flexneri NR1 bacteria derived from the Vibrio cholera bacterial strain, which is falsely claimed the causative agent of the gastroenteritis disease known as cholera.

According to the filing, the GM cholera strain used in the vaccine has essentially been artificially neutralized to prevent the toxic molecules that would, they claim, otherwise cause the disease from being produced. The non-active B-subunit of the cholera toxin molecule, in other words, is reportedly still synthesized in the bacteria, but it allegedly no longer holds the capacity to induce either disease or toxicity.

“Multiple steps were required to produce the genetic modifications found in the GMO,” explains the filing.

“Fragments of the Cholera toxin A subunit and haemolysin A genes were cloned into separate plasmids. The gene fragments were then modified in vitro by the deletion of part of the toxin gene and by the insertion of the mer operon. The plasmids were transferred into the V. cholerae, one at a time, and the genetic modifications were incorporated into the bacterial genome by recombination.”

To some who belive in the nonsense of germ theory, this might all sound like positive progress in the eradication of a disease that affects as many as 5 million people around the world annually, among which about 100,000 end up dying. But to those who have been paying attention to recent developments on the GMO front, feeding children and adults untested transgenic bacteria could become a surefire recipe for a public health disaster.

This is true of all GMO’s currently on the market, none of which have gone through rigorous, long-term safety testing prior to their approval. Nobody knows for sure how these synthetic substances will alter the human genome, especially later on in life, potentially leading to permanent and undesirable changes in human cells, tissue and even DNA.

Then, there is the issue of the new PaxVax oral cholera vaccine having been programmed to grow in the presence of mercury, a known neurotoxin that is still being intentionally added to injectable vaccines. Based on its design, the new vaccine more than likely contains added mercury, which means that it threatens to permanently damage the brains and gastrointestinal tracts of those who end up consuming it.

“If traditional bacteria can’t even grow well in mercury, do you think it is healthy for our children to have mercury in their bodies?” asks Fluegge. “Do our children need another mercury-laden vaccine?”

You can read the PaxVax clinical trial application for its new oral cholera vaccine here:

Sources for this article include:

Cadmium, which is increasing in the environment, inhibits zinc absorption, and is a pollutant of many mining operations especially gold mining. There are currently approximately 200 operational mines in South Africa alone, with almost 350 mining projects currently in various phases of development.

Your body will absorb zinc better if you get it from a non-plant source like red meat, Zinc is best absorbed when present with a meal that contains protein.

With the increased zinc, vitamin A (Retinol) should be taken as a supplement.

I’m in no way a licensed medical quack, I have no training in allopathic stupidity, which is designed to cause disease, and mask the symptoms of disease (in this description of quackery, I will make a distinction, those who sew up injuries and set bones, and prescribe antibiotics on the rare occasions the cleaners of disease form a bloom, are excluded from the term quack, and are decent and honest in their endeavours for the most part). I do not murder people for a living, as do many licensed allopathic quacks, especially oncologists, organ harvesters, virologists and vaccinators, nor do I promote unsafe and detrimental practices of unscientific stupidity such as chemo-therapy and vaccination, this is the disclaimer, if you worship the allopathic medical religion, nothing I will write would change that moronic mind set, so this disclaimer would make no difference, and for those foolish enough to seek out allopathic quackery for anything other than traumatic physical injury, you have my sympathy, they will cause you no end of suffering if you allow them.