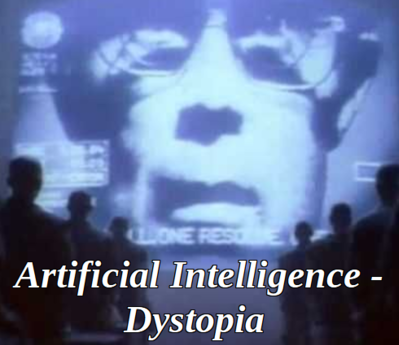 Governments around the world are working towards the development and implementation of AI (Artificial Intelligence) systems. You may think they want AI to improve services, or reduce costs, but no.

Government agents view the people they enslave as the enemy, and as such they require Surveillance networks, target Identification, target tracking, data collection of all activities, and assessment of “threats”.

They are imposing multilayered systems, a network of cameras that can monitor and identify the population using face recognition, graphene oxide injected into the victim under the fantasy of vaccination, to track, and alter behaviour, a 5G network to activate the graphene oxide, and assassinate targets or groups remotely, monitoring of communication devices, computers, internet and smart electronic equipment such as televisions.

When everyone is fitted internally, or is required to carry, integrated into mobile phone or similar devices, a smart chip, nothing will escape the A.I networks attention.

A.I will then be able to surveil and track everyone, all the time. Monitor and collect data on movements, interactions, trades, conversations, nothing will be hidden.

To allow total control a redundancy must also exist, a system that doesn’t rely on the victim carrying the technology with them, but the surveillance technology is built into infrastructure and electronics, this is already in place in China. This system can enforce social distancing, keeping the slaves apart to prevent dangerous communication or a realization of reality.

How Artificial Intelligence Decides Your Life

In February 2019, China introduced a facial recognition technology at a dizzying pace, that can identify faces even when wearing a mask, though with a slightly lower accuracy rate, across the fiefdom, they boast they can find anyone within minutes, track, monitor and coordinate policy enforces to ambush anyone they wish. AI can network millions of cameras across the entire country, scanning billions of faces, and identifying victims for the govern mental mafia agents to attack. The main power of such systems is intimidation, fear is a fundamental tool of every govern mental mafia.

Dissent at the point AI is fully integrated will be a form of suicide, even small acts of dissent could be life threatening, again China is the testing ground for the implementation of extermination camps, where the victims are often tortured, murdered, raped and harvested for their organs (organs can only be harvested from a living donor, they inject a paralyzing agent, the victim feels every cut), officially these camps are called “Vocational Education and Training Centers” by the Government mafia of China.

As the parasites of government gain total power over the individual, nothing short of total domination will be tolerated, not because a small act of dissent is a danger to the parasites in control, but because power is gained for its own sake, and such power must be expressed, ego (psychopathology) is the very foundation of political power, that is the nature of all psychopathic hierarchical govern mental models, the more power over the individual, the more oppressive the expression of that power. History clearly and repeatedly proves this to be true.

Poverty for all except the owners is the goal, the owners wish total monopoly, monopoly on everything, seeds, water, food, ownership, etc. Poverty is always key to any usury model, poverty is engineered, it allows control, and makes maintaining ignorance easy. Poverty prevents the slave from dreaming, such oppression, of resource monopoly for the elite, doesn’t allow the slave to lift their face from the dirt, as their masters boot presses down hard.

AI is the end to any need for the owners of humanity to care about granted rights, or any accountability for anything they do or inflict, they can cull vast numbers at a whim, indulge in torture, engineer suffering on a biblical scale. AI linked to an extermination system like 5G will effectively make the parasitical owners into Gods over humanity.

Why do the Agents of Govern Mental Control See the Population as a Threat?

Govern mental mafias exist, only as long as they can maintain a monopoly, if for example an independent trust network grew, and this network was not quickly integrated into the systems of governmental control, it would weaken or even end such governing mafias. This is due to contrast.

Contrast cannot be permitted to exist, contrast in any scam of govern mental mafia exposes reality, this means monopoly is key to hierarchical domination.

For example the present depopulation through vaccination, using the covid fiction, designed to frighten the masses into the accepting of ever more abusive dictates, and ultimately to allow mandated vaccination, either as a dictate of the local fiefdom mafia or using a travel restriction unless proving vaccination (vaccine passport). This vaccination mandate must be around 95% of the global population, otherwise the vaccinated can be compared to the unvaccinated, and the true nature of vaccines would be laid bare for even the most moronic to see.

Another example is allopathic main stream medicine, this model of nominal health care is designed to mask symptoms and generate dis-ease within the victim, it cures almost nothing, for example cancer was 1 in 1587 in 1900, today its 1 in 2 due in large part to the success of vaccinations, this is only possible because they prevent any alternative to the allopathic model, the contrast of a real health care system would end the allopathic system quickly.

You can examine any imposed monopoly of the govern mental system and reason alone would show that any alternative would quickly end such cartels. Take banking, if a trust network formed a model of advancing a medium of exchange, interest and fee free, externally guaranteed, as I propose on this website, the banking mafia would be contrasted, people could look at one model and compare it to another, quickly the present banking monopoly would weaken and eventually be abandoned.

Data is the New Black Gold of the System

Data mining is the true purpose of AI, which can form critical insights across whole populations, identified groups or individuals, data value can continue growing as new pieces of information are added, leading to predictive analysis, and insight into the mind of the target.

The volume of data collection is growing at an annual rate of 59 percent worldwide and Google already processes 600 petabytes (1 petabyte is 1 million gigabytes) of data monthly.

The more data stored, the more complex the AI systems required to manage it. Such levels of data allow AI to sift data connecting seemingly unrelated events, understanding the whole by analyzing and linking the behavior of the parts, detecting patterns and so predicting outcomes, actions, or dangers, and all this can be done in near real-time.

AI is set to invades every aspect of your life, once full networked, as the cashless society is imposed, no trade will be free of permission, taxation or fees. No conversation will be secret, private or hidden from others able to access it at any future point. Every movement will be tracked and logged, every action analyzed and predictive algorithms applied, big brother will not only be watching but dominating.

AI allows Cross–functional management, linking every area of govern mental mafia as a data sharing network, allowing the AI to examine all government departments in relation to any referenced slave (citizen) on the system.

The future is coming fast, the owners realise that if they go too slowly, people will reject such abuses, so they lock you in your homes as they install 5G, the tracking surveillance networks, the infrastructure of the extermination camps, and dismantle the nominal legal protections of their legal fictions under the pretense of protecting you.

The pandemic fraud has created an engineered opportunity for govern mental mafias to establish bold institutional change. The AI govern mental pioneers, within this engineered window are Denmark, the UK, Estonia, Singapore, Australia, and New Zealand.

You may be in denial of this reality, but all you need do is look, what are they doing, see for yourself!