There is No Such Thing as Waste, Only Material Purification and Reapplication

UK government definition- ‘Waste’ means any substance or object which the holder discards or intends or is required to discard.”

Waste is material with no tradable value, that you must pay another to remove, if you want rid of it.

Scrap is a little leftover bit of something, metal scrap is not waste, as it has a tradable value.

As a none profit cooperative bondsmen are never dealing with the general public, bondsmen only buy second hand goods from those who join the bond, and when those bondsmen are paid for their second hand materials, they’re not paid in fiat currency, but in the micro currency of the bond.

In the UK’s 160 local authority districts that charge annually for waste collection, the average fee to have a 240-litre bin emptied, each time, is £41.22

The “service” of “waste” removal, the council provide can be removed from the council rates bill, a form could be created for bondsmen to sign and send to the appropriate agent of the local government, informing them they no longer have any waste, and would in the future sell their second-hand goods, and no longer pay the council to land fill them.

The bondsman with the need to sell would pay for the delivery, removal and cleaning of the selection of small 240 Lt bins, one for garden and household compost materials, one for metals, one for glass, one for plastics, one for paper, they would have these emptied each week, and the price paid to the bondsman for their second-hand materials would either cover all cost of the bin service or make them a small gain. While they would be saving the £41.22 for each collection they had previously paid the local government mafia for their “waste” service.

Bin size dictates cost, but in an opposite way to the corporate model for example a large 6 cubic meter (8 cubic yard) bin in the UK presently costs an avg. £286

This is different using the bond, for example, if you have a 6m³ bin delivered, and it’s filled with garden organic composting material, the bin would be taken away and weighed or estimated, paying an agreed amount per ton for the second-hand material, this payment from the bondsmen of the cooperative would be offset against the cost of the bin delivery, removal and cleaning costs, which would be paid or payable on their micro currency account.

For example, if the value, in the equivalent in micro currency, is £12 per ton for composting organic matter and top soil mixed, but the cost of delivery (£50), removal (£50) and cleaning (£50) of the 6m³ bin totals £150, that means with the second-hand goods paid at £72, the cost of selling your second-hand goods after the service of deliver, removal and cleaning of the bin is £78, this saves the bondsman £208 compared to the corporate model, which views second-hand materials as worthless waste.

Tradable material can gain added value when filling the bin, for example, the composting material could be processed in to small chips, through a wood chipper, or the bin could be filled with clean topsoil, this would increase the tradable value of the material.

Let’s say for example it increased the value to £20 a ton for wood chipped material, this means the cooperative group would pay £120, so the bin would only cost £30 saving £256 compared to the corporate mafia.

If the price of good quality top soil was £30 a ton, this would generate a net gain, the 6 m³ of top soil would be £180, the cost of delivery, removal and cleaning of the bin £150, so the bondsman selling the second-hand soil would gain £30.

Subsoil, also has a value, this may be clay, which can be used to line ponds, make bricks, or be mixed with other ingredients to form better subsoil. The value of subsoil is low and may not be worth a great deal, let’s say it is worth £5 a ton, if you sell 6m³ it would be £30 so the cost of deliver, removal and cleaning of the bin would end up at £120. Larger bins may work out better value, if you had large quantities to sell, a 20m³ bin would generate £100, so the bin would cost £50

The cooperative does not buy from the general public, nor any commercial constructed legal fictions.

Worn out tyres are a fantastic resource, and if processed, have several vital uses within the community.

The tyres can be processed into a fine crumb, this can be used to replace the sand component in concrete, this type of rubber concrete has excellent compressive strength, resilience to ground torsion forces, resistance to salt and water ingress, and extended useful life capabilities, which makes it ideal as a substrate for roads, drives, paths and courtyards, at a ratio of 1 part cement, 1 part rubber crumb and 2 parts granite chippings.

It can also be added to grout mixes in granite set roads, paths and curbs, making a water proof joint preventing frost damage and greatly extending the materials life.

A tyre pyrolysis system heats the tyres and melts them in an oxygen free reactor, turning them into fuel oil, carbon black, steel wire, and incondensable gas, all of which have value. 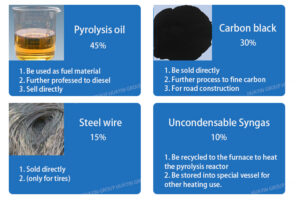 These purified materials can be used to power the site, or sold to pay for further site development.

In the UK tyre disposal costs typically between £1-£1.50 per tyre, much more for large commercial tyres.

The cooperative could make agreement with local tyre fitting companies, to place a free tyre bin outside their business, which would be collected when it was full. A sign would be clearly visible on the bin, stating that it was not to be used by the general public, but only to be used by bondsmen of the cooperative bond, and the cooperative would buy their tyre and pay the bondsman for each tyre they placed in the bin, at a rate of, for example, an equivalent of 20p per 12kg tyre in the micro currency, using a app online to identify their account for payment and a ticket number from the tyre service as proof.

If any bondsman independently wanted to collect tyres to sell to the bondsman of the cooperative they could also do this, and if these tyres were delivered directly to the processing site, a higher value would be given, again if the tyres had been chipped into small 2” pieces they would have a greater value and attain an even better price.

The equipment to build the tyre pyrolysis system would cost approx. £200,000 and would process approx. 10 tons of tyres per day.

The construction method I propose on the site would increase arable land, this requires building into the hillside, forming a heavy duty reinforced concrete box, this is encapsulated in a thick multi layers of fibreglass, which uses a large quantity of polyester resin, then covered in top soil where trees, ponds, roads or perma-cultures can be established.

There is a process to convert old PET (Polyethylene terephthalate) plastics, used to make plastic bottle, and many other plastic items, into polyester resin, this is the general purpose resin used to make fibreglass.

Resin cost around £2 a kg, and the site would require a constant supply in fairly large quantities to encapsulate the many underground structures, and tanks that would be built on the site.

The equipment to develop this process would have to be built. This would over the long run save considerable sums, and could also generate some external fiat to pay external fiat demands.

In the UK the government mafia demand a three year licence to trade metal, which costs £285. And records of who sells scrap to you are required to be kept allowing the State mafia to track stolen goods.

The corporate mafias presently impose a fee to take away old appliances, around £31 for a fridge or freezer, and as much as £90 for a large commercial freezer.

The appliances can be processed quickly using a processing system designed to reduce the electrical goods down to small pieces to allow separation.

Recycling re-defined as material collection, the processing system for electrical appliances is approx. $100,000 and can process approx. 120 fridges, TV’s, Freezers etc. per hour.

Scrap Metal Prices in the UK:

The polyurethane foam extracted from the electrical appliances can be chopped into small pieces, glue added and compressed into flat boards encapsulated in thick aluminium foil, to be used in construction, as insulation.

All these processing activities could be built, using the same method as suggested for the homes, the hillside is excavated, a concrete structure built, encapsulated in fibreglass and covered in 1.5 – 2m of top soil, with trees, rivers, ponds, roads etc covering it, having little impact on the natural environment and enhancing natural beauty rather than scarring it.

Expanding the Cooperatives through Saving Bonds

The cooperative is offered as shares, saving bonds, at a set value presently of 1000 KWD (£2,429), this same structure can be used to form new cooperatives both within the proposed cooperative and in new locations across the country and beyond.

The shares are a way to hold value an an interim method, until the true medium of exchange cryptocurrency platform is coded.

The shares are linked to purchasing power, and are a method to hold value when the fiat currencies crash around the earth.

Trading the savings bonds at any point, with the bondsmen of the bond would allow you to recover your saved value at any future point, and as the bond is expanded, using the methods described above of saving people, or making people, money for something that presently is a very expensive loss, to encourage people to join, in order to save the extortion of the State mafia for so called “waste” services, that ability of trading the saving bond would then become ever easier.

Also in this way cooperatives can gain funding, even from bondsmen already within the proposed cooperative, once it gets underway, as when they generate excess wealth through their labours and wish to hold that value, and simultaneously help those around them gain the same advantages they enjoy through the anarchic community bonding model, the saving bonds would be a simple vehicle to that end.

Buying second-hand goods to re-purpose is just one avenue the cooperative would develop, and the ability of the community to generate wealth would be exponential and without limit.