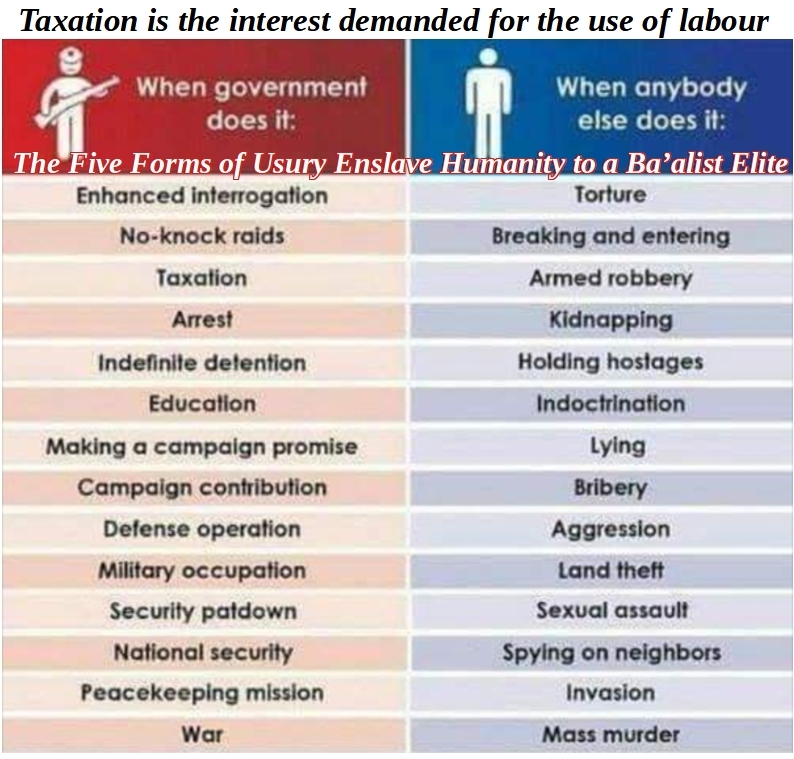 Usury is a benefit from a loan of a thing, so if I loan you a house and you return the house to me in the same condition it was borrowed, that is fair, but if I demanded a benefit of rent that would be usury. The most that could be demanded would be the loss in depreciation of the labours invested in the object loaned.

Usury is a one-sided extraction of the fruits of the labours of another, which has 5 basic forms:

Debt (the interest demand for the use of money)

Profit (the interest demanded for the use of capital)

Rental (the interest demanded for the use of infrastructure)

Taxation (the interest demanded for the use of your labour)

UK Taxation (the interest demanded for the use of your labour)

Population of the UK fiefdom 67.22 million

If you remove all the parasites, most of those presently existing parasitically would be forced to seek productive alternatives to trade reciprocally.

Presently, the wealth generated, is drained away to a small elite, draining resources from local communities, forcing many who would, if they had the resources, be highly productive wealth generators, to be non-productive.

This lack of resources stagnates innovation and forces a large percentage of the productive people in to positions of idleness. This forced idleness stagnates the development of skills and experience of the individual, prevents social cohesion, and creates an environment of despair, apathy and futility.

People are conditioned to believe they are striving to become super rich, an aspiration that is impossible for those outside a very select group. The indoctrination that wealth is gained through the accumulation of fiat currency is a form of insanity, constructed by the usury mind set.

Wealth is in community, in friends, in family, in comfort, in pleasures, in celebration, in enjoyment and in a safe, healthy and virtuous environment. The accumulation of fiat is only desired when hierarchical mafia imposes resource scarcity, making the slaves desperate for the crumbs of their masters, with the wealth and luxury of their masters, and that of their celebrity whores paraded in front of all, day after day, through the various media forms.

If the anarchic models are created all these forms of extortion would become redundant, the wealth generators would be resource rich, and the present models of engineered redundancy which creates mountains of waste dumped across the earth, in landfills, oceans, and rivers would end.

The mass production of poor-quality objects, or objects that have no real value, needing presently heavy marketing to get the marks to buy it, would end, construction of homes would be focused not on speed and profit, but solely on quality and longevity of construction, the artistry of skills and the aesthetic of the soul expressed in all our labours.

Allopathic health care (modern pharmaceutical medicine) would end, as real healing was established, free of all the lies and quackery presently suffered, people would quickly end the dehydration of the cells known as ageing, limbs would be regrown simply, as would lost teeth, people would live at the peak of health and vitality for extended periods, allowing them to grow and develop their consciousness, and to have the free time, if they wished, to master reason and virtue. Instead of decades people would once again think in centuries.

We’re presently slaves of psychopathic scumbags, a small caba’al of billionaires, monarchies, politicians, and religious sovereigns. The indoctrinated and conformist souls, competes against each other to prove they are the most obsequious of all the people alive, they wave their flags, they vote for their owner, they pay the usury demanded, they conform to every abuse and extortion, and they demand all other slaves do the same!

With the creation of alternative models to the imposed usury monopolies, once the bonding model was applied the wealth creators would open the flood gates to suppressed technologies, and to the advancement of technologies in new and innovative ways; ways we cannot even imagine.

The “need” dictates production, removing marketing, profit, taxation, management, capitalists and so allows the wealth generators to create goods and services within infrastructure the “need” provides, as there is no advantage to keeping innovation to yourself, sharing innovation would build more innovation, as only true knowledge can build more knowledge upon it.

The need is not interested in cheap quality, or dangerous toxic technologies or products, the cooperative bond servicing the “need” will not cut corners as corporations do routinely, for easy profits, will not risk the lives of those creating production, which is commonly the case because corporate management economizes on essential equipment to save money, they manage themselves, work related injury and death would plummet, pollution would all but disappear, reliability, longevity of use and elegance of design would be the basic function of production, because the “need” dictates, not capital monopoly.

1- Money does not make money, money can be employed to provide resource to a wealth generator, to allow them to generate wealth, the wealth this generates is traded, the wealth producer is given as little as possible, the state mafia extort adding taxation, and the capitalist extorts further added profits, only monopoly allows this added amount to exist, a form of usury.

2- If you don’t produce anything, you’re a parasite, it’s that simple, you can produce or you can extort, if you work for a government mafia, a medical mafia, a banking mafia, an insurance mafia, etc. you extort, you may only be paid hourly to extort, never the less you produce nothing in wealth.

The usury system must maintain a level of unemployment to repress earning for the wealth generators, allowing fear of replacement to prevent them demanding a greater share of the wealth they create.

There is no shortage of work for wealth generators, there is a shortage of permission to work, resource scarcity creates a situation where those with resources dictate production, and so poverty dominates.